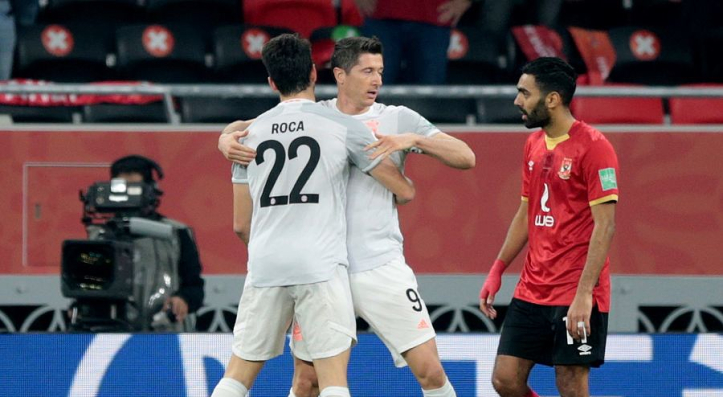 Two goals from Robert Lewandowski allowed Bayern Munich to seal a 2-0 win over El Ahly and move into the FIFA Club World Cup final.Mexican outfit Tigres wait the Champions League winners, who were made to work hard to overcome spirited and determined opponents in Doha, only sealing their progression with four minutes remaining.Ultimately, though, their passage was relatively comfortable as Lewandowski struck midway through the first half through the prolific Pole and controlled the remainder of the game without Manuel Neuer being called into significant action.From the beginning of the game, Bayern played with intensity and quality to their play, with few signs they had arrived at the venue barely 48 hours before kick off. El Ahly defended in numbers, though, and it was complicated for the Bundesliga giants to break them down. Bayern did not help themselves, making poor decisions around the box in the early stages.When they took the lead, it was the result of composed build-up play from Serge Gnabry, who found room in the box to pick out Lewandowski. With bodies between him and the net, he kept his cool to pick out a route through the forest of legs.What followed was largely tepid. Bayern dominated the game without wanting to exert themselves in a climate far hotter than they have been used to in recent weeks, while El Ahly lacked the quality to offer a credible threat.There were four minutes remaining when a place in the final was secured. The Egyptian side were increasingly leaving gaps in their defence, with one of these exploited down the right by Leroy Sane. Having made for the goal line, his clip across the box was met by Lewandowski at the back post for an easy finish.A clinical and efficient performance from Bayern, then, but not one to excite.
.