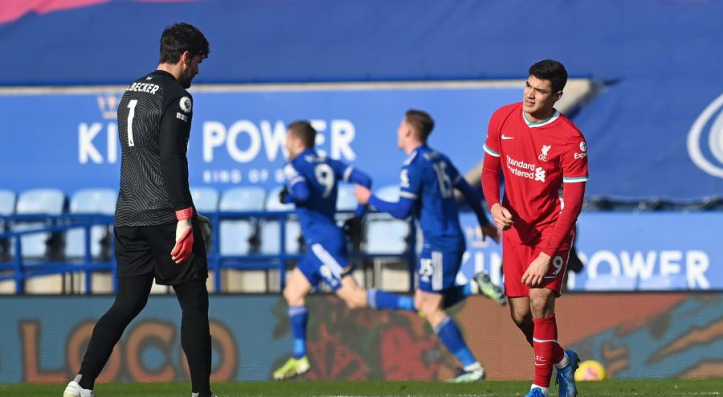 Liverpool’s hopes of retaining their Premier League title took another hit on Saturday afternoon when Leicester came from behind to beat the current English champions 3-1. The result now means that Jurgen Klopp’s side could finish the weekend 13 points behind Manchester City if Pep Guardiola’s side beat Tottenham Hotspur. So which players stood out for Brendan Rodgers’ team and which Liverpool stars let their side down again?Leicester City v Liverpool: Player Ratings, Match Stats, Player Stats❌ BAD PERFORMANCEAlisson Becker: 6.3With a full week off since the defeat to Man City, it seemed as though Liverpool had a spring in their step and goalkeeper Alisson Becker had been given enough time to get over his horrendous performance. However, things quickly fell apart for the Liverpool shot-stopper when he conceded a free-kick in the 78th minute and then tackled his own defender to intercept the ball and inadvertently pass the ball to Jamie Vardy to tap home a second for Leicester. Having been such a huge, consistent performer for the Anfield side for so long, that’s now been two consecutive games that Alisson has hugely let Klopp’s side down. Curtis Jones: 6.0With injuries aplenty and tired legs across the team, Klopp really needed a big performance from Curtis Jones when he started in Liverpool’s midfield on Saturday and unfortunately the young prospect just didn’t show up. Prior to getting pulled off in the 75th minute, Jones managed just 41 passes and 12 of them into the final third. The young midfielder also managed just two dribbles, two crosses, one shot and didn’t create a single big chance for his team. It simply wasn’t good enough. ⭐ STAR MANWilfred Ndidi: 9.3Although Leicester certainly rode their luck to grab a late equaliser and then go on to win the game, there’s no denying that Rodgers’ side defended well for the most part and limited Liverpool to just one goal. A huge part of that came from the industrious, defensive performance Wilfred Ndidi put in at the centre of Leicester midfield. No player across both teams made more recoveries or completed more tackles than the Nigerian talent. Leicester City v Liverpool: Player Ratings, Match Stats, Player Stats