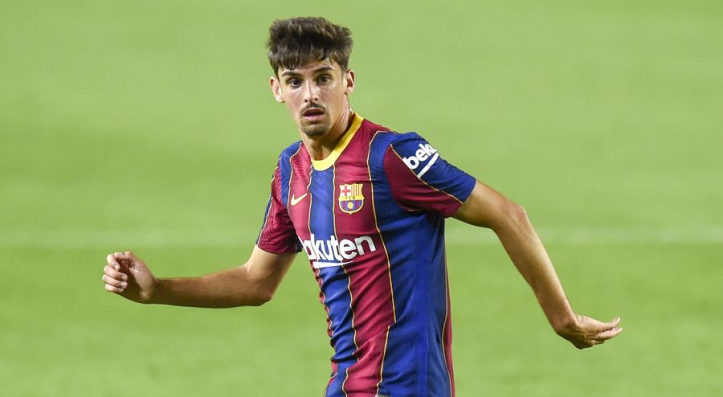 Barcelona enjoyed an impressive night as they thumped Alavés 5-1 in La Liga on Saturday.Lionel Messi was the star of the show, earning a perfect 10 FC Rating with a stunning performance.Barca forward Messi made his 505th league appearance in the match to ensure he equalled the club record held by the great Xavi.Barcelona 5-1 Alaves: Player Ratings, Match Stats, Player StatsAs a result, his performance and record captured much of the attention.However, it was also a hugely positive night for Trincão in his first La Liga start. Let’s take a look at the details.📷 Trincao: Match Snapshot⚽ GOAL ⏱️ 29′ Trincão put Barcelona ahead just before the half-hour mark, lashing in with his left foot after an intelligent cut-back from Ilaix Moriba.Messi had a goal disallowed for a questionable offside against Antoine Griezmann before he netted a wonderful long-range strike that did stand on the stroke of half-time.Luis Rioja scored for visitors Alavés, but Trincão ended the match as a contest.⚽ GOAL ⏱️ 74′ Messi raced through on goal and was challenged by goalkeeper Fernando Pacheco. The ball fell into the path of the onrushing Trincão, who delivered a cool left-footed finish on the rebound.Messi scored another wonderful goal a minute later and Firpo soon made it five.Trincão thought he had a famous hat-trick late on when he scored after being slipped through by Messi, but an offside flag denied him.A €31 million signing from Braga, Trincão completed two dribbles in the match, tied for the game high. The 21-year-old also had four shots, three of which were on target, and five touches in the opposition box, behind only Messi and Griezmann (both 7).〽️ Trincao: Rating Week-on-Week✔️ IMPROVEMENTThis was easily the best performance from Trincão in a Barca shirt, as he finished with an impressive 8.8 FC Rating. Only Messi was ranked higher.That was a big improvement on the 7.2 FC Rating he got against Real Betis in his last appearance, though he also scored and impressed in that game as a substitute.”It was a question of confidence,” head coach Ronald Koeman said of Trincão after the Alavés match.”You also have to give him the benefit of the doubt while he adapts. He is quick and he can go past people.”🗝️ Key StatsTrincao: What Next?Barcelona will see their season reach a pivotal point on Tuesday when they face PSG at Camp Nou in the first leg of their Champions League last-16 tie.Despite his fine display here and the fact he started in four of the group-stage games, you would suspect Trincão is unlikely to play a prominent role in that one.However, he should be right in the mix for the league matches against Cadiz, Elche and Sevilla that follow the PSG game.With Koeman still waiting for key players to return from injury and rotating his squad amid a hectic fixture list, the display against Alavés must have pushed Trincão up the pecking order.Barcelona 5-1 Alaves: Player Ratings, Match Stats, Player Stats