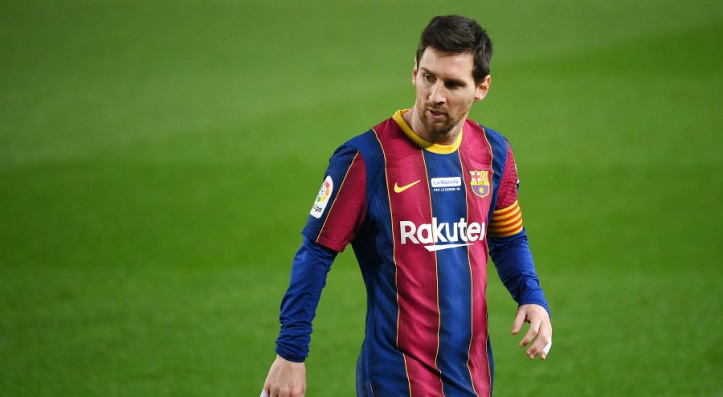 Lionel Messi scored two goals of the highest quality in La Liga this weekend to take his tally to 15 for the season.Both of the Argentine’s goals were scored from outside the box in superb fashion, as he helped Barcelona on their way to a 5-1 win against Alaves.Messi may now make our leaderboard, but he is still some way off reaching the runaway leader, Robert Lewandowski.The Bayern striker scored again on Monday in the German side’s rearranged Bundesliga match versus Arminia Bielefeld which was moved due to their Club World Cup exploits over the weekend.Lewandowski now has 25 goals and 50 points.His nearest rival for the Golden Shoe is fellow Bundesliga striker Andre Silva, who has now scored 18 for the season.Liverpool may have lost against Leicester, but Mohamed Salah still scored a lovely goal to take his tally to 17.Georgios Giakoumakis of Venlo has scored an impressive 22 goals and is the highest player on our list who doesn’t feature within one of Europe’s top five leagues.A talented group on 16 goals for the campaign includes Cristiano Ronaldo, Kylian Mbappe, Romelu Lukaku, and Luis Suarez.2020/21 EUROPEAN GOLDEN SHOE STANDINGS 2020/21 European Golden ShoeA reminder: The five elite leagues – Premier League, La Liga, Bundesliga, Serie A and Ligue 1 – all carry a weighting of 2, meaning that a player will be awarded two points for every goal they score in these competitions. For the leagues ranked sixth to 30 in Uefa’s coefficients rankings goals scored are given a weighting of 1.5, and goals scored in a league outwith the top 30, goals are given a weighting of 1. Ciro Immobile won the 2019/20 European Golden Shoe, scoring 36 goals for Lazio in a tremendous Serie A season. 2020/21 EUROPEAN GOLDEN SHOE (Summer Leagues) 2020 European Golden ShoePlayerTeamGoalsPointsKasper JunkerBomo/Glimt2740.5Amahl PellegrinoKristiansund2537.5Philip ZinckernagelBodo/Glimt1928.5Christoffer NymanNorrköping1827Rauno SappinenFlora Tallinn2626Veton BerishaViking1624Astrit SelmaniVerbergs1522.5Mushaga BakengaOdds BK1522.5Moses OgbuMjallby1421Anders ChristiansenMalmo1319.5Leke JamesMolde1219.5Maksim SkavyshBATE Borisov1919This is the 2020/21 European Golden Shoe race. If you want to see the final standing for the 2019/20 European Golden Shoe, follow this link.